WARNING: You Can Get Sued by Your Burglar 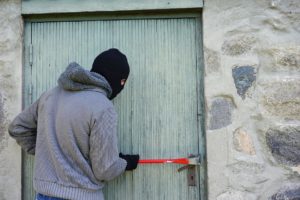 Police in the US say that a California homeowner who survived being shot in the jaw during a burglary is now ‘getting punched in the gut’ with the burglar suing him for firing back. This is according to CBS news San Francisco – ‘Burglar sues California homeowner, 90, who returned fire.’

According to the TV news channel, the suspect was charged with two counts of attempted murder while the homeowner was shot in the face and has said he will counter-sue. He said he had ‘to outwit the burglar who held him captive at gunpoint.’

In South Africa, home invasions are a common occurrence, but few know what their rights are in protecting themselves. It is one of the most terrifying situations you could find yourself and, naturally, your first thought is how to keep yourself and members of your family from harm.

Legally, it’s a bit of a minefield. The South African reports that: “You can only take a life if another life is in danger. What this means is that you don’t have a license to shoot intruders if you discover them in your home. If that person was unarmed, you could be in serious trouble yourself.”

The online publication goes on to say that the only time you have a right to defend yourself is in the instance of the invaders being armed and they were threatening you and others there. The courts will also decide whether you or others acted with ‘excessive force’, and if this was necessary or not.

There are many grey areas, with many decisions based on merit. This is the very reason why you need Right Cover with you to help you walk through the traps that could spring up on either side of you.

You obviously would not be thinking clearly at times like this. Aside from being thankful that yours and others’ lives would have been spared, you would more than likely be traumatised.

You’re left with anger and humiliation

On top of this, you have court rulings which do not go in your favour and you are left with anger and indignation that this is so.

Right Cover have a team of legal experts that will help you through the vagaries of law in instances such as this, and more than that, they will see that you receive the proper trauma counselling.

You will have to keep in mind at the time of the event, as hard as it is, that the only instance that you can be allowed to fire at the intruders is if your life and the lives of others are at risk. This is the hard and fast rule for everything that happens during an invasion.

First and foremost, then, is that the intruders must be armed. If they are not armed, the court will rule that your life and those of others were not in danger. But there are grey areas, still, that surround this. The team of experts from Right Cover know all the ins and outs of laws that are involved with home invasions.

Don’t be alarmed if one of the intruders (who was armed) was shot dead and the police open a murder docket for investigation. Law requires that this is done. Your team of Right Cover professionals will step in and guide you through the rest of the nightmare.